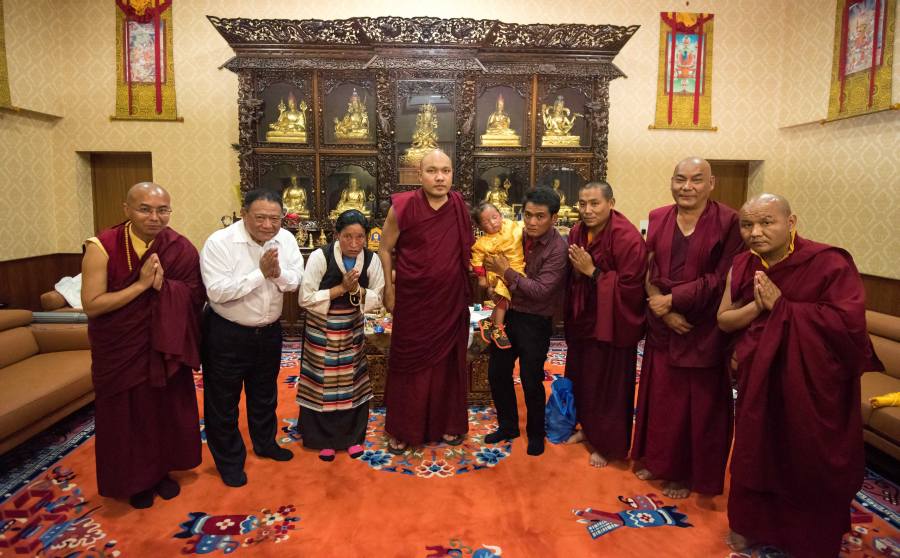 So the General Secretary followed his plans and went to Bodh Gaya for Gutor and Losar. Afterward, on March 2, the morning of the Marme Monlam and the last day of the Kagyu Monlam Chenmo, he and some friends had the opportunity to have an audience with His Holiness and took photos with him. After the friends left, the Karmapa told the General Secretary to come inside his quarters and gave him the following instructions: “There are many monks from Benchen here for the Kagyu Monlam and they should all return home. The search team should come here during the Nuns’ Winter Gathering at the time of the Tseringma practice.”

Following this advice, the Benchen monks returned to Nepal, and four members of the team came back to Bodh Gaya for the three days of Tseringma practice. On March 11, the third day of the pujas, His Holiness was writing down something during the chanting. At the end, he called the General Secretary up to the throne. Giving him the paper enveloped in a khata, the Karmapa said, “This was not written following my own thoughts. I wrote it directly as it clearly appeared. After the puja finishes, tell the search team to come to see me and I’ll give you an explanation.” When they met with him, the Karmapa told them that the paper held his new verses for them to chant as they went on their way to find the yangsi. His Holiness then urged them, “Go right away to Nepal and look for a child born in the Year of the Horse at the Boudhanath Stupa. You’ll find him there.”

They sped back to Nepal and spent days around the revered stupa looking for the young boy. Though there were crowds of people from Nubri and many children were born in the Year of the Horse, the parent’s names and the number of children in the family did not match. Nevertheless, all of these names were reported back to His Holiness. Then as the search team watched the webcast from Bodh Gaya on March 14, they heard the Karmapa conclude the day’s teachings on Gampopa with amazing news: "You might remember, it was a year or two ago during the Nuns’ Winter Dharma Gathering, that we started looking for the reincarnation of Bokar Rinpoche. We searched for, found, and brought him here during the Nuns’ Winter Dharma Gathering. And so now if all the external and internal conditions work out properly, if there are the proper signs and so forth, it’s quite possible, we do have the hope that we will be able to look for and recognize the reincarnation of the Lord of Refuge Tenga Rinpoche, and bring him here to this fourth Nuns’ Winter Dharma Gathering. It is not certain that this will happen. Nothing is definite, yet it is quite possible that it might occur. In case it does, we may well have to extend this gathering for about two days.” Many other people heard this webcast as well and began calling the General Secretary, “Did you find him?” they asked. “No” was the reply. “You have to use all the skillful means you can muster,” they worried. “We need a reincarnation right away!”

On March 17, His Holiness sent a message to Khenpo Garwang stating that the Benchen Monastery should perform Tara puja throughout the night in order to remove obstacles.
Finally, on March 19th at 9pm in the evening, Khenpo Garwang received a sudden message from the Karmapa: “Bring this child from Rö quickly to Bodh Gaya by the evening of March 20 or the morning of March 21.” The search team had been on an edge trying to find the yangsi in Boudha, and now they had to turn around and somehow bring the Yangsi all the way from the northern mountains of Nepal to Bodh Gaya in the south of India’s Bihar State in 24 to 36 hours if not sooner.

Fortunately, Tashi Öser had a good connection with an important person in Nepal who helped him reserve a helicopter for the next day at 8am. Since the helicopter could not carry many people, they sent Khenpo Garwang, Tashi Öser, and the mother’s younger brother, Yönten Namgyal (known by his nickname Babu), who was a monk at the Benchen monastic college. In this way, during the hurried trip to India, there would be someone familiar to a young boy who had never been far out of his village, and everyone could be more at ease.

When the helicopter landed in Kathmandu, a jeep was waiting at the airport to take everyone straight away to India. They drove all night and arrived at 5am on the morning of March 21. When the General Secretary, accompanied by Sherab Wangchuk and Jimba Lodro, arrived at Tergar around 8:30am, they looked quite tired yet joyous at the same time. After meeting the family at the airport, they had also learned that Dawa Putri was five months pregnant, thus fulfilling the Karmapa’s prediction that the family would have four and a half members.

No one at Tergar Monastery was giving any definite information about the yangsi, yet the main shrine hall was filled with a quiet excitement and people were dressed up in their best clothes. To the right of Karmapa’s throne was a smaller one covered in golden and red brocade with two chairs set next to it. Ayang Rinpoche had also come and was seated to the Karmapa’s left. The Karmapa had overseen all the details of the ceremony from the text to be chanted to the order of the procession with the yangsi. At 9:30am His Holiness entered and took his seat to preside over the practice, the main one being the Supplication to the Sixteen Arhats, who are dedicated to preserving the teachings.

When it came to the section of inviting the arhats to be present, the puja was paused and through the main vermillion doors of the shrine hall came a procession led by the General Secretary carrying a long incense holder, followed by the Junior Secretary Tashi Öser, Khenpo Garwang, the yangsi in a golden chupa with his parents and Yönten Namgyal. They were accompanied by Gyaltsen Sonam from the Tsurphu Administration. The parents placed their child on the rug in front of the Karmapa, who was wearing his black crown, and after they had bowed deeply, the yangsi was brought up next to the Karmapa and looked directly into his eyes for a long time. The young boy was then placed on his throne while the parents sat next to him and he continued to turn and gaze at the Karmapa.

For his long and fruitful life, many offerings were made to the yangsi of the representations of body, speech, and mind. All the while the yangsi, just over two years old, sat calmly on his throne, looking with great simplicity and clarity at what was happening and the numerous people who came before him with their gifts and long white scarves. Many people remarked on how unusual this was for a very young child from a remote region, who was now the focus of a grand ceremony and crowds of people. His presence filled the hearts of everyone, as it will continue to do during his many years to come.