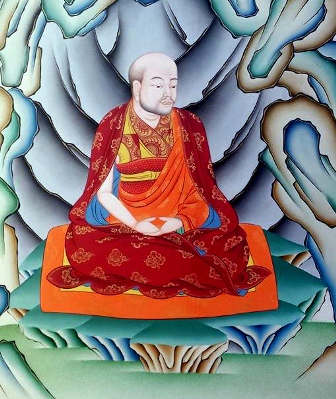 Due to the great upheavals of the 1950s and 60s in Tibet, the records of the lives of so many Tibetan masters of old were lost. Also those of the lamas of the Benchen monastery in Nangchen, Eastern Tibet, a monastery of the Karma Kagyu tradition did unfortunately not survive. Here is what little we know of the two previous incarnations of one of its eminent masters, Benchen Tenga Rinpoche:

The first "incarnation" was called Benchen Lama Samten. He was also called Gönkhen Samten, signifying his mastery of protector practices. Having studied the full range of Karma Kagyu doctrines and practices, Lama Samten is said to have spent most of his life in solitary retreat, focussing mainly on the rituals and practices of Karmapakshi, a guru yoga on the 2nd Karmapa, White Tara and the main protector of the Karma Kagyu school, Dorje Bernagchen. He also specialized in Shing Kyong Kunga Zhonnu, which is another Karma Kagyu protector, and the special protector of The Sangye Nyenpa Rinpoches, who are the head masters of Benchen monastery and the followers of the Benchen lamas. Lama Samten was a close student of the 7th Sangye Nyenpa Sherab Nyingpo and assisted in the upbringing of the next incarnation, the 8th Sangye Nyenpa Tendzin Drubchog. Nowadays we only know that he was a highly realized being, whose blessing was able to cure all sorts of ailments instantly. Indeed many people from all over Kham came to see him and receive his blessing. Shortly before passing away, he remarked to his students that he had grown somewhat weary and that he was about to depart to some pleasant gardens for a while. To Sangye Nyenpa he gave a thigh-bone trumpet of his and asked him to take good care of it as he would return eventually to ask it back. He was soon reborn as the Drongpa Lama Tendzin Chögyal of Benchen. [Sherab Drime]