A Short History of Benchen Monastery in Tibet 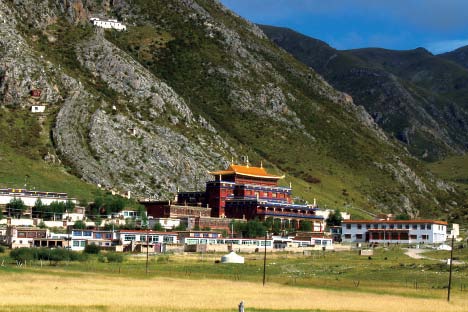 Benchen Monastery was founded by the 4th Sangye Nyenpa Rinpoche Gelek Gyamtso. Before he actually founded Benchen Monastery, instead of living in his own monastery Changchub Chökhor Ling in Denkhog (Kham), he went to Surmang Monastery. There a building was established for him known as "The Red Abode of Nyenpa Rinpoche“. After leaving Surmang he wandered around in Kham. One day, he came to an area called Ga which he liked very much. He thought that this would be a good place to built a monastery. As a confirmation he waited for an auspicious sign to occure.
One day, while he was resting at a particular spot, suddenly a huge raven landed on a big rock nearby, dancing on it and making loud noises. Sangye Nyenpa Rinpoche found this strange and decided to investigate. He climbed the rock and when he arrived at the top, an object fell out of the raven’s beak as it flew away. Sangye Nyenpa Rinpoche found it to be a small turquoise image of Dorje Bernagchen the 2armed Mahakala, the main protector of the Karma Kagyü Lineage, which he kept enshrined in the future monastery.

Considering this to be a very auspicious omen, indeed, he went to find the owner of the land the Radha family whose head Radha Dura Gönpo was the chieftain of this area. (Chime Rinpoche who presently lives in England is a descendent of this family). Radha Dura Gönpo joyfully donated all the land for the monastery 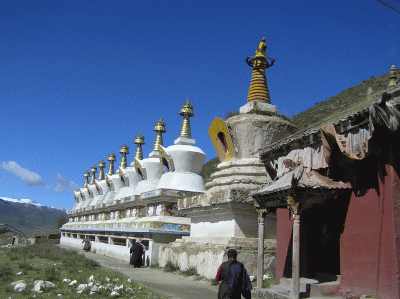 and supported the construction.
The work started right away but strange phenomena occured constantly such as heavy thunderstorms and other hindrances. Sangye Nyenpa Rinpoche realized that it was good to do the practice of the protector the Radha family was related to, Shing Kyong (the protector of Dewachen the pure realm of Amithaba). Nyenpa Rinpoche went into retreat, supplicated Shing Kyong and thus pacified the situation. Since then Shing Kyong is one of the main protectors of Benchen Monastery.
In the very beginning there were 7 monks in the monastery known as "The 7 Monks of Nyenpa Rinpoche“. Gradually the monastery flourished and the number of monks increased.
During the time of the 1st and 2nd Tenga Rinpoche he established 4 retreat centers (for Naro, Nigu, Gyalwa Gyamtso and Kunrig).
Benchen Phuntsog Dargyeling monastery in Tibet continued until early 1959. During the Cultural Revolution both the main monastery as well as the summer retreat (Yarnä Lhakhang) were distroyed.
In the early 80's with the help of Benchen Chime Tulku the monks of Benchen managed to rebuilt the Yarnä Lhakhang. Chime Tulku passed away a few years thereafter. Meanwhile the 4th Benchen Chime Tulku was found. By now (2008) he is 17 years old.

Since 1997 the main shrine hall is under construction under the guidance of H.E. 10th Sangye Nyenpa Rinpoche and the 3rd Tenga Rinpoche.

Benchen Monastery would like to thank all those who supported the undergoing rebuilding project.