An Amazing Story: Finding the Reincarnation of Tenga Rinpoche, Part 1

An Amazing Story: Finding the Reincarnation of Tengan Rinpoche - Part 1 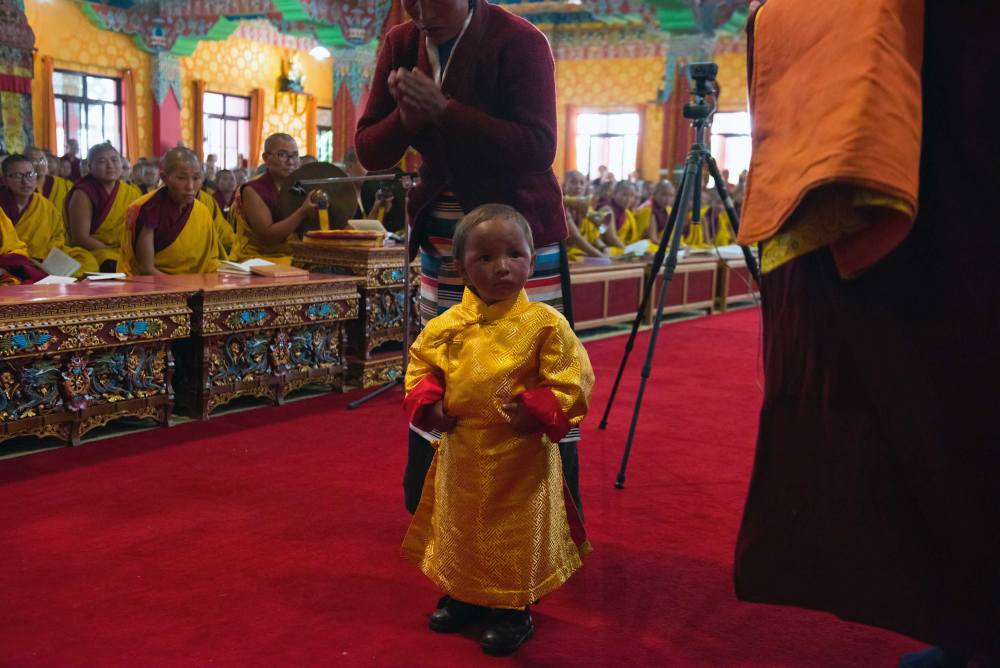 Ever since he passed away on March 30, 2012, finding Kyabje Tenga Rinpoche’s reincarnation (yangsi) has been awaited with great hope and deep devotion, especially in the Karma Kamtsang lineage. Before founding Benchen Monastery in Nepal, he was the ritual master for HH the Sixteenth Karmapa and famous for his detailed knowledge of vajrayana ceremonies.

When traveling in Germany, the Gyalwang Karmapa spoke about Kyabje Tenga Rinpoche on August 30, 2015: “While here in Germany, I had the opportunity to meet briefly with many students of Kyabje Tenga Rinpoche and share some remarks with them. It has been a while now since he passed away but during all this time, his students and I myself have been continually remembering Rinpoche. This recollection has caused our faith, devotion, and love for him to continue flourishing.

“Before Rinpoche passed away, he spoke a few words to me about his future reincarnation. Therefore, I have a great hope and prayer that we will soon meet with his yangsi. So my main words of encouragement for the disciples of Tenga Rinpoche and those connected to Akong Rinpoche as well is to let your minds be at ease and relax. Continue sustaining the enlightened activities of your teachers and I think this will be enough.”

Half a year later, on February 22, 2016, during the closing ceremony for the Kagyu Monlam, His Holiness the Karmapa made a thrilling announcement: during the Tseringma puja conducted at the Arya Kshema Winter Dharma Gathering, he felt great devotion for Tenga Rinpoche and had a “thought or minor vision of where he might be.” He said he would keep these details quiet until he was able to share them with HE Sangye Nyenpa Rinpoche but that he hoped Tenga Rinpoche would be able to return soon.

... on the 24th February 2016, His Holiness presented the first prediction letter about Tenga Rinpoche to Drubwang Sangye Nyenpa Rinpoche. In this special document, His Holiness gave the names of the parents and a clear description of the landscape in which they lived. Also on February 24, His Holiness and Sangye Nyenpa Rinpoche together selected the members of the all-important search team, which included the General Secretary Tempa Yarphel, the Junior General Secretary Tashi Öser, Khenpo Wusung and the Dorje Lopön Tsultrim Rabten.

Afterward His Holiness said that the four members should come in the evening and that he would send a qualified person with them for the search. When they all had gathered, the Karmapa said that Khenpo Garwang would be helping them, so there were now five people on the team. Khenpo joined as a representative of HH the Karmapa and the Tsurphu Labrang. His Holiness said that Khenpo Garwang is brilliant and has the awareness of nine people. Throughout the search, the team could always seek his counsel. Khenpo Garwang then requested the Karmapa directly, “I do need a map of the yangsi’s birthplace. Without one it will be difficult.” His Holiness said playfully, “OK. I’ll pretend that I know something,” and asked for paper. He talked as he drew: “There’s a mountain here, it looks a bit like this. And there are houses. Then there’s a river going along something like that. It’s not too big.” In the end he drew a picture that turned out to be clear as a photograph, showing the layout of the land with a river flowing through it and the design of the houses, some with flat roofs and others with peaked ones, and one house was set directly beneath the mountain.

In further conversation His Holiness said there were 32 to 40 households in the area. (It turned out later that an NGO had tallied the households in this spread out village and there were exactly forty.) He also stated there would be four and a half people in the family. Responding to a query, the Karmapa replied that the “half” could refer to a child in the mother’s womb. When General Secretary asked how old the yangsi would be, the Karmapa answered, “It seems that he is three or four.”

The prediction letter had said the yangsi’s home was near a blessed mountain called Gangpung Gyen (Gangs phung rgyan, Manaslu in Nepali, the eighth highest mountain in the world). Khenpo Wusung wondered which village it might be, as there were so many in that area. The Karmapa replied that it was the first village down from the Tibetan border, which turned out to be Samdo. His Holiness then encouraged them, “It is good to search for the yangsi right away,” so the following day they all went back to Nepal and left for Nubri, a high mountain valley in northern Nepal on the border with Tibet.

Since Nubri is a six-day trek from Kathmandu, they took a helicopter to fly through the deep valleys and high mountains up to the northern border. As they approached their final destination with Manaslu looming in the sky before them, the search team was astonished to see that the details of His Holiness’ drawing matched the landscape they had entered.

Once they had landed and settled in, for six days the search team looked everywhere in the Samdo area of Nubri. They went from house to house and Khenpo Garwang said to each of the families they met, “We are looking for a very bright child. If it could study, this child would bring a great benefit to everyone. There are four children like this and we have found one each on India, Bhutan, and Sikkim. Now we have come here looking for the fourth one, born in the Year of the Horse. Do you know of a child like this from Samdo?” But the search team could not find a child of three or four years, who had parents with names matching those in the letter of prediction. The team reported back to His Holiness that they did not find a child matching the description in his prediction letter.

The next day the Karmapa requested the team to come back to India, so sadly they had to return empty-handed to Tergar Monastery in Bodh Gaya.Here they had an audience with His Holiness. After noting that they had been unsuccessful, he paused for a moment and then said that it would be best if the Benchen Monastery could host the forthcoming three days of Tseringma puja. They would take place at Thrangu Rinpoche’s Vajra Vidya Institute in Sarnath and should be celebrated as elaborately as possible. His Holiness asked, “ Can you arrange this?” And Tempa Yarphel replied, “Yes, of course, Your Holiness. No problem whatsoever.” His Holiness then clarified that the senior Benchen monks should be present and that he would invite the senior monks form Rumtek Monastery, including the dorje lopön (the ritual master), the umdze (chant master), the chötrimpa (discipline master), and so forth. The practice would be led by umdze from Rumtek and the dorje lopön from Benchen.