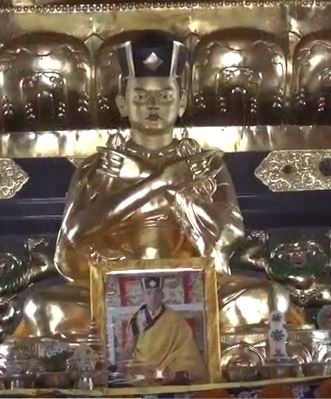 The Benchen Community extends its sincere heart felt greetings and joyful best wishes to His Holiness Karmapa Ogyen Trinley Dorje, on the occasion of his 31st birthday. On the morning of 26th June 2016, the 31st birthday celebration, at Benchen Nang Tan Thoesam Ling Shedra in Pharping, was presided over by H.E. Drubwang Sangye Nyenpa Rinpoche. Rinpoche commenced the proceedings by delivering a very profound address about the activities of H.H. Karmapa. This was followed by the 16 Arhats puja, during which H.E. Sangye Nyenpa Rinpoche made the offering of Body, Speech, Mind to the throne of H.H. Karmapa. Rinpoche also offered katak which was followed by katak offerings by the Khenpos, lamas, monks and lay practitioners. Throughout the katak offering the monks continually chanted the Long Life Prayer of His Holiness Karmapa. The day’s celebration was concluded later in the evening with a cake cutting ceremony.At Benchen Phuntsok Dargye Ling Monastery, Swayambhu, Dorje Lopon lead the Lamas and monks in the morning’s celebration puja and katak offering ceremony for H.H. Karmapa’s 31st birthday. At 7pm there was a cake cutting ceremony with the monks singing the “Happy Birthday to You” song to H.H. Karmapa, which was a very joyful and happy culmination to the day’s celebration.