During the summer course 2013 in Benchen Phuntsok Ling, Allmuthen, Drubwang Sangye Nyenpa Rinpoche gave teachings on "The Juwel Garland of the Bodhisattva" by Atisha Dipamkara Srijnana.

The video recordings of the teaching were edited to present a high quality and are now published in accordance with Rinpoche.

For more than a decade the summer course, established by Kyabje Tenga Rinpoche as a yearly summer event in Benchen Phuntsok Ling, has become an annual highlight in for many of Rinpoche’s students who attend from all over Europe. The range of participants includes those who are “veterans”, who met the XVI. Karmapa and took part in the legendary summer camps during the eighties in Füssen, but participants also include children born in the third millenium. The time period of the camp is indicated by a vibrant mixture of tents and caravans erected on the meadows for a few weeks seeking to keep cold, rain and sun away from the participants.

Our European craving for individualism is confirmed in the Gompa. You can find everything from the handknitted multicoloured sweater, to a combination of muscle-shirt and trunks and up to a dark suit. On the Asian side however, dark red robes prevail as they did 1000 years ago.

The basic Tibetan texts used for reflection, are 400 years old in the case of Tenga Rinpoche who continued to teach the Karma Chagme text. The texts taught by H.E. Sangye Nyenpa Rinpoche, who after an interim of five years spent a week teaching in BPL, date back more than 900 years. Nothing has changed the validity of these texts.  From the context of our contemporary culture marked by banality and the golden calf with its deceitful and seducing glamour, the eight verses on mind training by Langri Tangpa act as diamond landmarks for the spiritual traveler -  who spurred by the ideal of the Bodhisattva - stumbles through the fog. To the surprise of many of us, Sangye Nyenpa Rinpoche was teaching in English for the first time which together with his gestures and array of features produces an extraordinarily direct effect. He strongly recommends following the example of the Kadampas by directly transforming the teachings into practice, just as the Kadampas had done.

A real highlight of these three weeks was the celebration of the occasion of Tenga Rinpoches 80th birthday. We will never forget this event taking place in three tents especially erected for this purpose, thanks to the perfect preparations, the artistic performances and last but not least, the delicious food which more than 500 guests enjoyed courtesy of the kitchen crew.

May there be many birthdays still to be celebrated!

A special surprise was Chime Rinpoche’s visit, who at the last weekend of the three-week course arrived from London without any warning to participate in the Guru Rinpoche Empowerment offered by Sangye Nyenpa Rinpoche. It was the first time in Europe that such an auspicious meeting of the three Benchen Lamas took place. Those who had the chance to be present at that “family meeting”, witnessed a historical encounter of these three special teachers. A wonderful birthday present for Kyabje Tenga Rinpoche!

We are already looking forward to the next summer course. 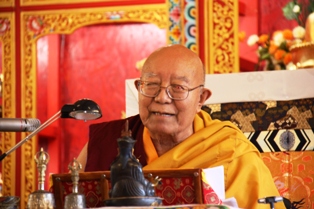 In spite of his serious health problems, Kyabje Tenga Rinpoche made the summer course 2010 an unforgettable event for all those who had the chance to be there.
In empowerments, pujas, lectures and hundreds of interviews, the perfect activity of a Bodhisattva was demonstrated. The Bodhisattva works untiringly for others. Unaffected by stress or strain, he/she conveys to all around the sense of being supported in kindness. Greed, confusion and hatred, the emotional entanglements that trap us and that we feel helplessly prey to, lose their power in his presence. The rays of the sun burn through the fog.

In the two weeks' cycle of teachings – framed between the Tara Retreat and the concluding Gonkar Retreat – Rinpoche continued to comment on the text "The Union of Mahamudra and Dzogchen" by Karma Chagme (1613-1678). This stunningly relevant treatise explains all the important aspects of the path from Refuge and the importance of Bodhicitta up to the realisation of Mahamudra. This summer, as 350 years ago, it was a skillful means to keep the audience of several hundred listeners in a state of undivided attention. Many thanks for the wonderful translations of Christoph Klonk (German) and Thomas Roth aka Sherab Drime (English). 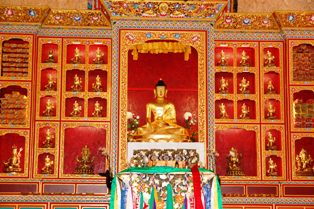 A special surprise awaited us in the altar sponsored by Tenga Rinpoche: a huge wall cabinet, hand-carved and decorated in Nepal, whose shelves are already filled with Tara statues and Kanjur texts. Thus, after the enlargement of the room in 2009, a classical Tibetan Sanctuary is taking shape that will serve generations to come as the center of their spiritual activities.
Step by step, Kyabje Tenga Rinpoche’s vision of the European Center is becoming a reality.
Underlying the successful realisation of this vision, however, are the selfless efforts of the members of the organisation, who in the past decade, while working full jobs, have given their own time to advancing the development of the center. And we enjoyed in this Dharma space the annual meeting of friends, the growing of the children, Spülopa’s jokes, Lamas  playing football and clement weather.
We delighted in the art of vegetarian cooking, in a cappuccino doppio from Georg’s coffeeshop, in rainbows over the hilly landscape. The family atmosphere we treasure derives last but not least from the perfect networking of volontary helpers with the professionals. No matter whether from the kitchen crew or from the child care team, everywhere friendly serenity reigned – a glimpse of Dewachen. 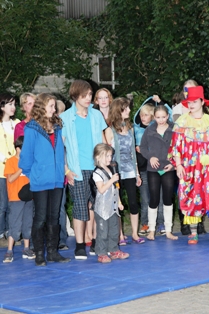 But this dream ended far too quickly. The 'goodbye party' which meanwhile has become  traditional, started with a Mandala offering to Rinpoche – a creative dance, songs prepared by the youngsters with their attendants, and with magic tricks and Spülopa’s Dharma sketch. As dawn broke, the gathering, whipped up by DJ Edward, turned into a jubillant all-inclusive dance under the strings of lights. The Milarepa-Tsok-Puja marked the dignified spiritual conclusion of the Karma Chagme weeks.

In recent years, the unbridled greed of financial speculators has caused the world economy to falter, with dire consequences that affect our center, too.  Currently, we even lack the funds to install the insulation and desperately needed weather protection for the Sanghahouse, erected in 2009. The interior finish remains woefully incomplete.
It’s an opportunity for compassion and the living practice of the Paramitas. Bliss for all of us!