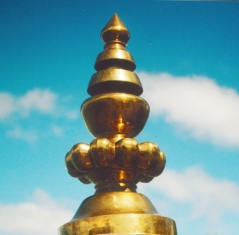 Sertok - the golden finial, or ornament, on the very top of a Buddhist temple. This sertok was brought to Benchen Phuntsok Ling by Tenga Rinpoche in 2000, intending it eventually to adorn the roof of the new lhakhang.

The architectural plans for the new lhakhang had already been authorized some years ago.
The Sertok Project itself consists of three building phases:

After the completion of Part A several years ago no further project progress was visible due to lack of financial means. However, since 2006 many people contributed smaller and bigger donations for the continuation of this project. 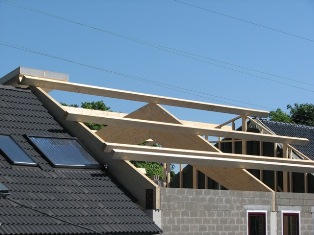 After the summer course 2008 Tenga Rinpoche decided that the construction work should be continued.

Our architect and the building company developed a plan how to complete Part C until summer 2009.

Since Part C includes an extension of the existing shrine room (see building plan) and the existing dining area below, the appearance of Benchen Phuntsok Ling is now considerably modified.

Parts of the old building were deconstructed down to the foundation walls. 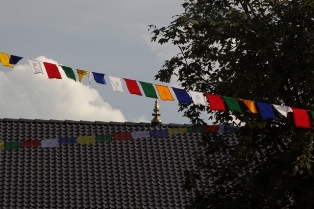 It was really a very tough time schedule to get everything completed until the summer course 2009.

Work is finished now ... and Benchen Phuntsok Ling was able to welcome Rinpoche, his monks and all of his stundents in this new part of the building.

Don't hesitate to contact us for further information: BPL Office