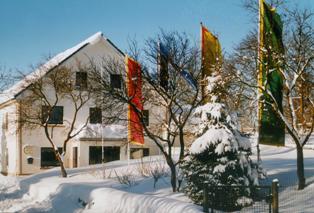 The Dharma centre Benchen Phuntsok Ling consists of a former farmhouse, stables, a barn and an older house on 7.2 hectare of land. A substantial part of the property is zoned as building land. Tenga Rinpoche visits every year and oversees the development of the centre as well as all building activities.

Since the establishment of the centre in 1999, ongoing building activity is focused on improving and expanding the structures already present. During the first years, amongst other tasks, a biological sewage system has been put into place, bathroom and shower facilities and the eating hall as well as a new entrance have been made ready for use. Also appropriate accommodation for Sangye Nyenpa Rinpoche’s and Tenga Rinpoche's stay were well prepared.

In 2009, just in time for the 10th anniversary of Benchen Phuntsok Ling, the reconstruction of the enlarged Lhakhang had been completed so that the summer course could take place in there. The great beautiful Buddha statue in the lhakhang which was consecrated during summer course 2009 was given by Tenga Rinpoche.

A new shrine was ordered from Nepal. It is planned to mount it before the visit of H.H. Karmapa. In the lhakhang there were heating elements installed and a temporary internal partitioning was built. This enables heating in the new part of the lhakhang and to use it during the cold periods of the year for courses. The new enlarged dining hall is heated too, thus there can take place courses during all seasons.

As scheduled the completion of the construction shell of the Sangha House, a project initiated by Tenga Rinpoche during the summercourse 2007, was accomplished successfully. Gradually the individual rooms will be completed. Up to now four partition walls have been integrated.
At the end of the year 2008, on advice of Tenga Rinpoche additional land could be bought which includes neighbouring plots and an older house which Rinpoche chose the name Shenpen Ling for. It is a great gain for the Dharma center. It now serves as accommodation during Dharma courses and as retreat facility.

Benchen Phuntsok Ling is situated in the beautiful quiet hills of the German-speaking border region of the Belgium Ardennes and is part of a little settlement called Allmuthen, which consists of just a few farms. The nearest German village is Losheim and the city of Cologne is an hour’s drive away (see also under route description). The Belgium Ardennes and the German Eiffel are known for their beauty and location far from the hustle and bustle of big cities and the noise of highways.
Benchen Phuntsok Ling is located on top of a hilly area at an altitude of approx. 600m. The winters can be quite strong and are known for being quite snowy. A locally acclaimed skiing area called "Schwarzer Mann" is not far away.

The summers are short approximately from June to September; there are lakes for swimming in the surrounding area. However, even on hot summer days it can get quite chilly in the evenings after sunset. Therefore it is always advisable to bring warm clothes and rainproof gear. Since the Ardennes are the first raised landscape from the English Channel on mainland in Belgium, the lush green of the hills and forests are richly nourished by frequent fresh rain spells.

It is an area especially suited for walking vacations and has a great attraction as such in the tourism industry. See also the relevant web pages of some tourist bureaus in the (wider) area: