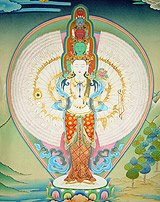 For many years it has been a common practice in Benchen Phuntsok Ling to practice Nyung Neh. The Nyung Neh practice is very effective in purifying negative karma, accumulating merit and opening the heart to compassion.
This practice was brought to Tibet by the Indian nun Gelongma Palmo. Gelongma Palmo herself was seriously ill and in this state she had a vision of Chenresig, who gave her the long mantra of the Thousand-armed Chenresig as a healing spring. Thus Gelongma Palmo became healthy again and a yogini who later attained enlightenment.
The Nyungne Retreat is a special two-day meditation of the Thousand-armed Chenresig that belongs to the Kriya Tantra. It is said that through the practice of Nyungnes the gate to rebirth in low realms of existence is closed forever. The completion of eight Nyungnes will, according to tradition, lead to a rebirth in Dewachen.

In this course Lama Ngawang Tsultrim will first give detailed teachings on practice including visualization. He will then take the eight vows that are to be held during Nyung Neh from the participants and guide them step by step through the meditation practice. The retreat includes days of silence as well as days of fasting during which people neither eat nor drink.

Before participating in the Nyung Neh Retreat, it should be medically checked on one's own responsibility, whether the health requirements for participation are fulfilled. In addition, the prerequisite for participation is to have taken refuge and to have at least received the reading transmission (lung) or better the empowerment of the practice of the Thousand-armed Chenresig.

Due to the current situation regarding SARS-CoV-2 (corona-virus), it will not be possible to hold the Nyung Neh retreat onsite in Allmuthen this year. However, in order to maintain the tradition, we are offering an online course instead.

All sessions will be conducted as Zoom meetings. Each participant can perform the practice at home. Details will be published in the BPL Newsletter.

Important: You will have to join already the first session Thursday, Sep. 30 at 19:00 CEST and all the following ones until Sunday morning 08:00 CEST! Please be prepared to keep your Nyung Neh practice text ready to hand.

There will be no charge for attending the course. However, every donation is most welcome! In making a donation, you will actively be helping Benchen Phuntsok Ling to compensate for the financial difficulties resulting from the corona restrictions.