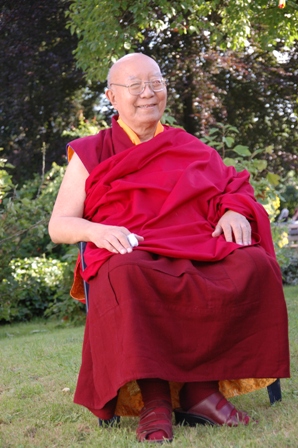 Short Biography of the Tenga Rinpoche

The  story of Tenga Tulkus starts at the time of the 7th Sangye Nyenpa Rinpoche. One of his students was the highly realised Lama Samten. He was also known as "Gönkhen Samten", signifying that he was a specialist of protector practices (Gönpo = Protector). He spent most of his life in retreat, meditating on his yidam Karma Pakshi and on the main Kagyu protectors. He practised mostly Dorje Bernagchen and Shing Kyong. The power of his blessing was such that he could cure all kinds of sickness instantly and he was widely known throughout the region. Many people came to receive his blessing.

At the time of the 8th Sangye Nyenpa, Tenzin Drupchok, Lama Samten had grown old and sometimes displayed physical unease and sickness. However, one day he seemed to be very well and happy. On that day, he told Sangye Nyenpa that he felt very happy because soon he would be going away to a beautiful land, a wonderful, peaceful garden. Among other things, he gave his thigh bone trumpet to Sangye Nyenpa and asked him to take good care of it until he came back. Soon afterwards he passed away.

Some years later, Tenzin Drupchok went on a pilgrimage to Lhasa and Central Tibet. As was customary at that time in Tibet, a high Lama could not just travel quickly from one point to another, but had to accept invitations to monasteries and villages on his way in order to give empowerments, teachings and blessings. On one such occasion, Tenzin Drupchok was invited by a local government official called Drungpa. He spent some days in Drungpa's house and met a small boy, who was the youngest son of the family. The boy was very alert and inclined towards the Dharma and liked him very much. One day when Tenzin Drupchok was alone, the child came to him and asked him whether or not he still had his thigh bone trumpet as he would like to have it back soon.
Tenzin Drupchok was amazed and overjoyed as he realised, that this boy must be the incarnation of his former teacher Lama Samten. He talked to the family about it and they readily agreed to give the boy to him after some time when the boy would be older. A few years later, when he was on his return journey to Kham, he went to see the family again and took the boy with him to Benchen Monastery.

Back in Benchen, the boy was enthroned as the incarnation of Lama Samten and Tenzin Drupchok gave him the name Karma Tendzin Chögyal. He soon started the traditional monastic education and also practised extensively. After some years, Tenzin Drupchok told him that it was time to do the traditional three year retreat and advised him to go to Palpung Monastery in Derge - the seat of the Situ Rinpoches and of Jamgon Kongtrul Lodrö Thaye, also know as Jamgon Kongtrul The Great. Tendzin Chögyal went there and eventually was admitted to the retreat center, Tsamdra Rinchen Drag, which was situated a few miles away from Palpung Monastery. It was here that the great Jamgon Kongtrul spent most of his time, away from the distractions of the huge Palpung Monastery.

Tendzin Chögyal did his retreat under the guidance of Jamgon Kongtrul himself and was very successful. Having reawakened his former propensity for practice, he did a second three year retreat. He completely realised all the practices and after the completion of the retreat, Jomgon Kongtrul declared:"Now you are equal to me in realisation". He told Tendzin Chögyal, that he was planning to go on a pilgrimage to central Tibet and asked him to take charge of the retreat centre during his absence. Jamgon Kongtrul being one of his Lamas, he could not refuse and so he became the retreat master for a number of years. When Jamgon Kongtrul returned to Palpung some years later he told Tendzin Chögyal that now was the time to return to Benchen. The 8th Sangye Nyenpa Rinpoche had passed away and the monastery needed a capable Lama to look after the affairs and take over the administration. Tendzin Chögyal, by now a very realised and well respected Lama, returned to Benchen and spent most of his time teaching and giving empowerments to those who requested it. The later part of his life was devoted mostly to the education of the incarnation of Sangye Nyenpa Rinpoche, the 9th.
The 3rd incarnation of Tenga Tulku was born in 1932 in Kham (Eastern Tibet). At the request of the 9th Sangye Nyenpa Rinpoche, Situ Pema Wangchuk Gyalpo (11th Situpa) profesized the name of the parents, his birthdate and birthplace. The present Tenga Rinpoche was found at the age of 7, whereupon he began his studies. He was given the name Karma Tenzin Thrinle Pal Sangpo at the age of 19, when he received his full ordination vows. He received extensive and thorough Buddhist training and education in Benchen Monastery and Palpung Monastery from the 9th Sangye Nyenpa Rinpoche, Gelek Drubpe Nyima, and the former Situ and Jamgon Rinpoches respectively.
He studied all the tantric rituals and philosophy with many different masters. From his uncle he learned about traditional Tibetan medicine. He completed his studies with a 3 Year retreat.

In 1959, after the Chinese invasion, he left Tibet and after spending one and a half years in Kalimpong he settled in Rumtek Monastery (Sikkim), the main seat of H.H. the 16th Karmapa. There he served His Holiness for 17 years, the last 9 years of which he acted as Dorje Lopön (Vajra Master). In 1974 he accompanied His Holiness on his first tour to America and Europe.
Since 1976, Tenga Rinpoche has been living in Swayambhu, Nepal, where he founded Benchen Phuntsok Dargyeling Monastery and a retreat centre in Pharping. Since 1978, he´s been touring Europe extensively. Ven. Tenga Rinpoche is one of the few living meditation masters who hold the still unbroken lineage of the Karma Kagyu Tradition. He is the founder of Karma Kamtsang Association in Poland, Karma Thegsum Ling, Verona, Italy and Lotus Trust as well as Lotus Direkthilfe in Germany.